Her obituary in the NYT Subscribe to The Times

She rose to fame with the vocal group Lambert, Hendricks and Ross and, after personal struggles, found success as both an actress and a cabaret mainstay.

Annie Ross, who rose to fame as a jazz singer in the 1950s, struggled with personal problems in the ’60s, faded from the spotlight in the ’70s, re-emerged as a successful character actress in the ’80s and finished her career as a cabaret mainstay, died on Tuesday at her home in Manhattan. She was 89.

Her death was confirmed by her former manager, Jim Coleman.

Ms. Ross acted on stage, screen and television and recorded several well-received albums under her own name. But she remained best known for her tenure, from 1958 to 1962, as the high voice of Lambert, Hendricks and Ross, probably the most successful vocal group in the history of jazz.

Lambert, Hendricks and Ross were unusual in that they derived most of their repertoire not from Tin Pan Alley but from jazz itself. The group’s specialty was putting lyrics to previously recorded jazz instrumentals, a practice known as vocalese.

Jon Hendricks provided most of the lyrics, but Ms. Ross contributed some memorable vocalese numbers of her own, most notably “Twisted,” based on a blues improvisation recorded by the tenor saxophonist Wardell Gray in 1949, which she first recorded under her own name in 1952.

In witty and somewhat surreal words carefully matched to the jagged contours of the original recording, “Twisted,” which begins with the memorable lines “My analyst told me/That I was right out of my head,” tells the first-person story of a neurotic patient who is convinced that she is wiser than her psychiatrist (because, among other reasons, “Instead of one head/I got two”).

Despite its unorthodox subject matter, “Twisted” was one of the most popular numbers in the Lambert, Hendricks and Ross repertoire, and probably the most frequently covered: It has been recorded by Joni Mitchell, Bette Midler, Mark Murphy and others. In 1997, Ms. Ross was heard singing the song over the closing credits of Woody Allen’s film “Deconstructing Harry.”

The critic Leonard Feather called Ms. Ross “the most remarkable female vocalist in jazz since Ella Fitzgerald.” Few others went that far, but her voice, which could slip comfortably from a smoky contralto to a giddy soprano, proved ideal for handling parts that had originally been played by pianos or trumpets. It provided an attractive contrast to the gruff timbres of Dave Lambert and Mr. Hendricks, while her polished and glamorous stage presence was an important factor in the group’s appeal to audiences otherwise uninterested in jazz.

Annie Ross was born Annabelle Macauley Allan Short on July 25, 1930, in Mitcham, a town in Surrey, England, into a theatrical family. Her parents, Jack and Mary Short, were a Scottish vaudeville team; she claimed that her mother gave birth to her immediately after finishing a performance at a London music hall.

When she was 3 she was sent to Los Angeles to live with an aunt, the singer and actress Ella Logan. She made her movie debut in 1938 in an “Our Gang” comedy short and graduated to feature films in 1943, playing Judy Garland’s younger sister in “Presenting Lily Mars.”

She later moved frequently — first to New York, where she studied at the American Academy of Dramatic Arts; then to London, where she took the name Annie Ross and worked as a singer and actress; then to Paris, where she came under the spell of jazz, performing and recording with a number of expatriate American musicians. One of them, the drummer Kenny Clarke, became her companion and the father of her only child, Kenny Clarke Jr., who survives her. Survivors also include her companion, Dave Usher.

Ms. Ross recorded “Twisted” for the Prestige label during a brief return to New York in 1952. It became a minor hit, but she did not stick around long enough to savor its success, instead returning to Europe in 1953 to tour with Lionel Hampton’s band and then settling again in London.

She went back to New York to appear on Broadway in the British revue “Cranks,” and in 1957 she joined forces with Mr. Hendricks and Mr. Lambert to record the album “Sing a Song of Basie,” on which they sang Mr. Hendricks’s lyrics to some of the Count Basie big band’s most celebrated recordings, using multiple overdubs to make their three voices sound like a dozen. The album was a hit, and the three vocalists decided to make their partnership permanent.

For four years, Lambert, Hendricks and Ross were a worldwide sensation, and Ms. Ross became a model for a new breed of jazz singers who could sing rapid-fire, tongue-twisting words with precision and clarity. But despite the group’s success, she quit in 1962.

At the time, her departure was attributed to poor health. In later years she acknowledged that it had been fueled partly by friction with Mr. Hendricks, but mostly by her increasing dependence on heroin.

“Yeah, I had a hangup,” she told The New York Times in 1993. “A little bit here, a little bit there, and that was it. It was the culture of the time — the long hours, having to produce every night, needing stimulation. I guess you’re young and fearless and think you’re going to live forever.”

After Lambert, Hendricks and Ross finished a club date in London in May 1962, Ms. Ross stayed behind. “I kind of knew that if I came back to America I might die,” she said. The group continued with other female singers.

Gradually, Ms. Ross straightened out her life. She married an English actor, Sean Lynch, with whom she briefly ran a London nightclub, Annie’s Room. But by 1975 she had declared bankruptcy, lost her home and divorced Mr. Lynch, who died soon after in a car crash. The work had dried up as well.

With singing jobs scarce, Ms. Ross shifted her focus to acting. From the mid-’70s until she returned to the United States in 1985, she appeared frequently on the London stage, in plays like “A View From the Bridge” as well as in musical productions like “The Threepenny Opera” and “The Pirates of Penzance.” She also became a familiar face on British television. A role in the 1979 movie “Yanks” led to other film parts, including turns as a histrionic villain in “Superman III” (1983), an addled writing student in “Throw Momma From the Train” (1987) and an aging and temperamental jazz singer in Robert Altman’s “Short Cuts” (1993). 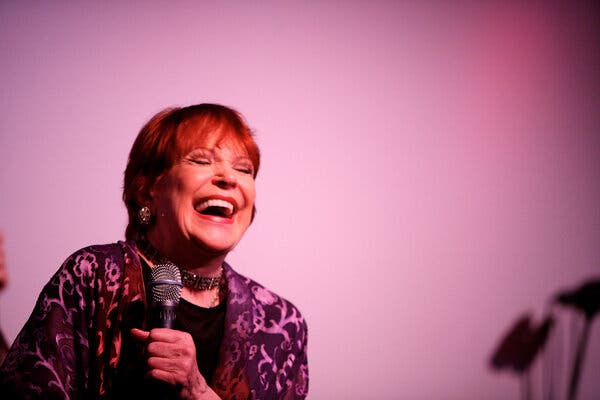 No longer a virtuoso vocalist, she developed an act that relied primarily on her acting skills. While her contributions to jazz were not forgotten — the National Endowment for the Arts named her a Jazz Master in 2010 — she reinvented herself as an intimate and witty cabaret artist.

Reviewing her performance at the Metropolitan Room in Manhattan in 2007, Stephen Holden of The Times praised her performance in general and her rendition of “I Got Rhythm” in particular. “If you’ve got as much rhythm in your body and music in your head as Ms. Ross does at 76,” he wrote, “who indeed could ask for anything more?”

Ms. Ross performed regularly at the Metropolitan Room until it closed in 2017. In 2014 she released the album “To Lady With Love,” a tribute to Billie Holiday.

Through all the ups and downs of Ms. Ross’s career, her sense of humor remained intact.

During one tour in the 1990s, a reporter asked her what “an old Annie Ross fan” could expect to hear at her show. Without missing a beat, she answered, “An old Annie Ross, I guess.”